A recent visit to my local beer shop led to me buy a trio of Kölschs. Kölsch is simply German for Cologne-ish – from Cologne – the biggest town in North Rhine-Westphalia. The beer’s brewed with top-fermenting (obergärig) yeast and is then lagered in a cool Keller to reach maturity. It’s traditionally served in a cylindrical glass called a Stange. I find them clean and fruity. I’ve only just caught up with them.
The Braufactum beer (middle) doesn’t bear the name Kölsch because it’s not from Cologne. It seems to have taken an Italianate name form, possibly influenced by the craft brewing culture in Italy, which alludes to the city it’s inspired by but doesn’t hail from. It’s gone from Frankfurt to Cologne via Milan and then been imported into Britain.
None of these beers are bottle conditioned – a process that would actually ruin their beauty. Instead get them as close as possible to the bottling date.
Braufactum Colonia 5.5% 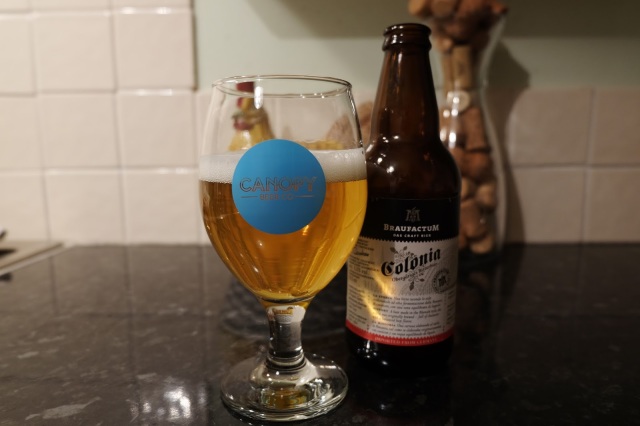 It pours a light vanilla gold with a white elastic sputum. The liquid’s completely clear and glowing – delicious just to gaze at. On the nose there’s sugar and Weetabix with a distant note of vanilla. The carbonation brings the beer alive on the palate. On the taste, decaying apple skins and hints of unripe banana. There’s a touch of butterscotch and white grape too yet it’s also clean and cleansing like lemon. Lasting impression – light carbonation with vanilla sponge and bananas with a honey edge. There’s no bitterness whatsoever but it’s still mature. One criticism – a tiny bit watery due to lacking some body.
The reason our first beer doesn’t call itself a Kölsch is because that term is protected by the Kölsch Konvention and has PGI – Protected Geographic Indication. It can’t be brewed outside a 50km radius of the city. The law binds all member states of the EU but how its PGI is policed or applied isn’t clear. British breweries tend to label their takes as Koln or Cologne beers to avoid saying Kölsch so as not to Kontravene the Konvention (although Canopy Brewing does). However some brewers within the EU candidly call it the K word: Bevog is an Austrian brewery from just over the border. Their naming their beer Kölsch can’t have slipped under Cologne’s radar but I’m not aware of any legal action.
One thing that strikes me about the image of bottles at the top is the amount of blood red involved. The Früh offering on the right half-replicates Cologne’s flag and is where the primary colour comes from. The three crowns are supposed to represent the Magi – the three Biblical wise men. Their remains were brought to the church on Ursulaplatz from Milan by the holy Roman emperor Frederick Barbarossa in the 12th century.
The other aspect of the town’s flag – the odd little squiggles – are supposed to be ermine tails which in turn represent virgins. The legend is that Saint Ursula (originally from around Aberystwyth!) was to be married to her foreign fiancé in the fourth or fifth century. She decided to go on a kind of gap year pilgrimage beforehand with a retinue of 11,000 virgins. It sounds like the plot from a tacky 1970’s Italian exploitation flick but wait – instead she and her fellow inter railers got massacred by the Huns on their way to Rome!
Reissdorf Kölsch 4.8%

A platinum beer – very light verging on water golden. It boasts a high white craggy head and runes appear around the inside of the glass from the lacing. The aroma’s of wheat and honey. It’s tangy but mellow with a crystal clear sparkling carbonation. On the palate, yellow apples, golden treacle, sweet conference pears and elderflower. It’s clean again. All these flavours are wedded together in a beautiful consistency.
This is a 15th Century painting by Hans Memling of Saint Ursula standing in front of an archer. He’s taking studious aim at point blank and she’s raising her right palm as if to say “I’m fine, thanks”. The 11,000 virgins may in fact have been just eleven – the number increase might be down an inscription misinterpretation which would make it more likely as an event. Hildegard of Bingen (not far from Cologne) composed chants in honour of Ursula. Our Hild is also one of the first to describe the female orgasm and used to write about and brew beer too!
In London, St Mary Axe in the city is named after a church dedicated to Saint Ursula and Saint Mary – the axe in question one of the alleged Huns’ murder weapons. It seems the church is convinced that the only venerable women are virgins. If you’re a female, it doesn’t matter what you do, it don’t want to know you unless your cherry’s intact. The church of St Mary Axe stood roughly where the Craft Beer Company in EC3 now trades and it’s in that chain I first had Tzara – Thornbridge Brewery’s keg offering of Kölsch! Coincidence? Yes!
The reason the church building is no longer there is because of a trade deal we had with Germany in the 1940s whereby they’d drop off bombs on our cities in exchange for many of our own being delivered to theirs. There used to be 40 breweries in Cologne but virtually all of them decided to discontinue and collapse at this time. Breweries in London copied this vogue.
Früh Kölsch 4.8%

Such clarity again! It’s a clear lens-perfect vanilla pale – more clarified than the glass it’s served in! The smell is gorgeous – honeysuckle, vanilla sponge and sweet cider, possibly the best smelling beer ever. The perfect gentle charge of carbonation that spreads the liquid across the palate – this is obviously a Kölsch strength and has been characteristic in all three bottles. The beer seeps in like osmosis – practically inhaled. The word delicate isn’t delicate enough to describe its levity but it still has body and nourishment. Its Brandy sweetness is balanced to a tee by its fruity sharpness – even a little dry tartness. Ends on a dryish finish but not astringently so. It’s the most far-reaching of the three. It’s liquid springtime.
The style’s become one of my favourites and is that rarest of beers: one both me and my wife love. It’s not a complex or challenging beer style but one that elevates you towards a ray in the clouds. It can equal the fruit hit from the chopped flesh in a Pimms glass in a way which is subtle but hits the perfect note and amplifies down the glass. It’s available all year around but is particularly suited to spring and summer.

Früh Kölsch definitely wins this taste-off even with its stiff competition. In some bars in Cologne it’s served directly from an oak barrel and soaks up some of its woody flavours too. I’m looking at the Eurostar’s website now………