Skip to content
My first ever black IPA was a pint of Raven by Thornbridge Brewery at the Cask & Kitchen in Pimlico in about 2009 (the beer’s now been renamed Wild Raven). At the time, it seemed so aggressive I wasn’t sure I could handle it. The experience charged out in two conflicting directions: it had the bitter stimulating funk of ground coffee but equally the fluorescent citrusy notes of American hops – an addition that was becoming increasingly popular in Britain. Since then, I’ve had black IPAs across the range from around 3.5% to 10%. The style constitutes a core beer for most breweries now.
Not everyone likes black IPAs nor the oxymoron in the name (Black India Pale Ale – both black AND pale) but it’s a beer I hunt down and that experience in 2009 wouldn’t be anywhere near as challenging now. That shock to the palate has been subsumed and habitualised. Black IPAs also suit both cask and keg dispense. 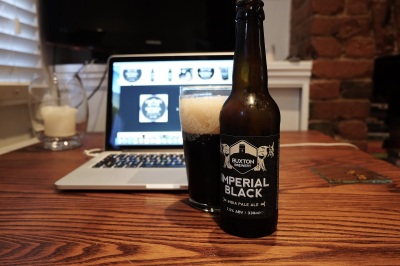 A high rocky beige froth builds up when you hoy this in the glass. The colour’s darkest brown and opaque fooling you into thinking it’s black at first glance. The aroma is grassy hoppy like a spray of orange zest. On the dive it’s tangy and carbonated but mellifluous. It’s both roasted and sharp – vending machine plastic cup coffee from the malt and hoarse dryness from the hops. It’s actually quite spicy too like there’s a trace of black or red pepper in it (as far as I’m aware there isn’t). The strongest impression I get is of that citrus fruit mist that gushes from under the thumbnail when peeling a naval orange. The body’s not thick or sticky either but quite sloshy. 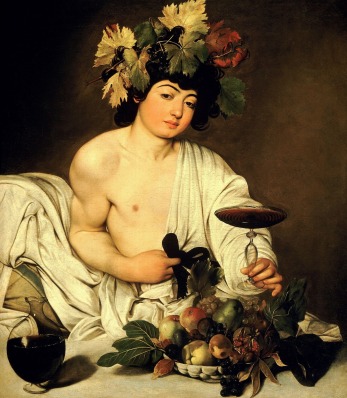 Bacchus here likes to raise the wrist too although the glass he wields looks like it would spill too easily for any serious downage. What does the look in his eyes reflect? It looks like he’s daring you to comment about what’s on his head. Maybe I discern indifference, or is it emptiness? If it’s the latter, perhaps it’s because there were no black IPAs when he was around at the end of the 16th century. With some gorgeous roasted malt and zesty hops, he might break into more of a smile. I’d take him out for a black IPA if he agreed to stop flaunting his man boob in public.
The real reason I’m showing you him is because Caravaggio’s most famous is the poster boy for the birrifico (brewery) of our second beer; it’s his image on the bottle crown. The brewery’s website is beautiful too – beer, food and sun porn. This particular beer is listed in its “avanguardia” section. 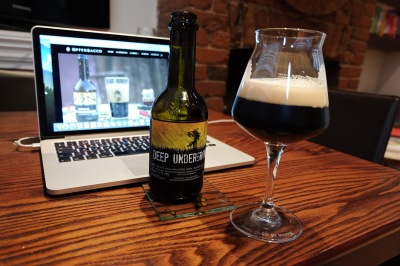 I’m already annoyed because when I look at the bottle shape and artwork on the label, it reminds me that we rarely indulge in such aesthetic indulgences here. Why? Italy is new to the beer scene but the Italians immediately associate the craft with pleasure as much as they do their wine and food. The design of the bottle makes you want to nurse its sensuous curves in your hands but maybe that’s just the birra talking. When emptied, the bottle could grace a row of objets d’arts for posterity on a ceiling beam. There’s also a plastic seal under the crown that allows the bottle to be sealed again after opening. That won’t be necessary today.
The beer decants like black treacle with trills of carbonation streaming up the glass sides. The high khaki head seems like velvet. The aroma is of treacle, molasses and a hint of liquorice. The taste then propels you the other way: though there’s a burnt Demerera sugar bitterness, it’s starchy and dry like an unsweetened water biscuit. I do get a cherry note too like a Ricola sucking sweet. The mouthfeel isn’t as thick as the look and nose would suggest – it sloshes silkily around the tongue. The palate and aroma also conjure a sawdusty edge like a workshop haze. It’s lovely, complex and grown up. The impression I’m left with is of a beer that, despite being 7.1% is actually light and dainty.

My knowledge of American Geography is limited but when I think of Colorado – Odell’s home state – I think of craft brewing and mountains. This bottle label checks both. 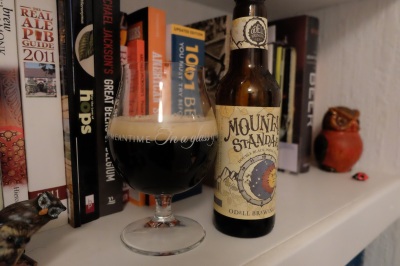 Of all three beers so far it’s the most powerful on the nose. As I placed the glass on the bookshelf for the photo my nostrils were assaulted by an unctuous fog of limes, black Opal fruits and liquorice strings. It’s actually stronger than that, it verges on tar. If I shut my eyes, I can imagine distant roads being resurfaced and just catching it on the wind. However that sounds, the aroma is utterly appealing.
The beer is darkest walnut in colour rather than black. The head is the same light brown as you’d find on a macchiato and it’s thick and elastic. In the hatch, the body is highly carbonated but still viscous. You sip it and it buzzes on the tongue. The taste is of blackest full cocoa chocolate and and it desiccates the palate.
Aroma and dryness are what dominate in this ale. American breweries excel in making beers that are hoppy and heavy but still carbonated. It’s the kind of beer us Brits are trying desperately to emulate.
All three beers show how brewing is turning into an art form across the world including places where beer has never traditionally been the tradition. On that note, I’m declaring Deeper Underground by Opperbacco from Teramo the winner here. It has crafted a heavy beer that simultaneously manages to push new flavours and levity into a black IPA.
Check out some other vertical tastings:
Kolsch Beer:
International Saisons:
Heavy Black Roast Beer:
Flanders Red:
Heavy Rye Beer:
Tea-infused Beers: